Geoff Johns Jumps Into the Unknown With Geiger 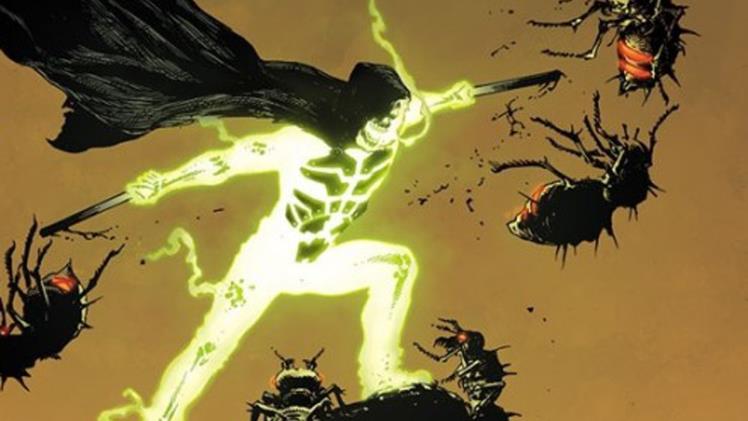 The traditional paradigm of the comic book world has for years involved artists who work their way up with team leaders and producers that manage storyline and script tightly and ultimately dictate how a title will progress, including character growth. It doesn’t leave room for a whole lot of creativity at first. However, as artists and story writers develop, they come into their own, build a strong fan following, and leverage a greater say in their creations. It’s not a full takeover by any means; the long winding path of Chris Claremont’s X-men is proof of that.

Geoff Johns is not a stranger to the creative conflicts that are normal in a comic book shop. He spent years moving up the ranks in DC comics, only to find himself behind the steering wheel as that brand’s chief creative officer. The administrative roles were so demanding, it took Johns away from what he loved most, actually creating comic storylines and art. However, under the Image brand umbrella, Johns will once again have the chance to be behind the pen himself with the launch of Geiger, a creator-owned project that Image is supporting as a market disruptor.

Using a near-future dystopia perspective, Geiger sets its characters in a bit of a wasteland Earth, ravaged by nuclear war, and survivors scavenging what they can to scratch out a survival in the same conditions. Partnering with Gary Frank, Geoff Johns has been crafting the details of the storyline and the episode arcs carefully, looking to push the envelope in comic book storytelling one more time.

The two creators already have a solid history with each other. They both worked directly on Batman: Earth One as well as Doomsday Clock, two very well-established graphic novel publications by their own rights.

The concept of Geiger has been around for a while. Geoff Johns and Gary Frank had already cooked up the idea and started putting pen to paper as soon as their work on Doomsday Clock reached its end. However, what was really far more attractive to both was the fact that Geiger would be their own creator-owned project versus just another title in the stable of a brand’s portfolio. They called the shots on it. That made a tremendous difference in their production schedule as well as the product crafted.

Geiger reaching launch and production is a bit of a new chapter for both men. Geoff Johns departed DC in 2018, and he spent a lot of time on the Stargirl television project as well. A lot has happened since, and Geiger is a bit of a catharsis for Johns coming through the gauntlet to the other side. Now, with Image’s solid support, Johns gets to go back to his creative roots and focus on just producing a new, high-quality comic book title with a solid partner.

Time will tell if the title will hold up on its own, but the accomplishment is already achieved; the title has made it to production and is in the hands of comic book readers as well as gaining TV series attention. At the end of the day, that’s what all the effort is about – producing graphic novel art and seeing it enjoyed.

The Top Benefits of Using a Monitor Riser